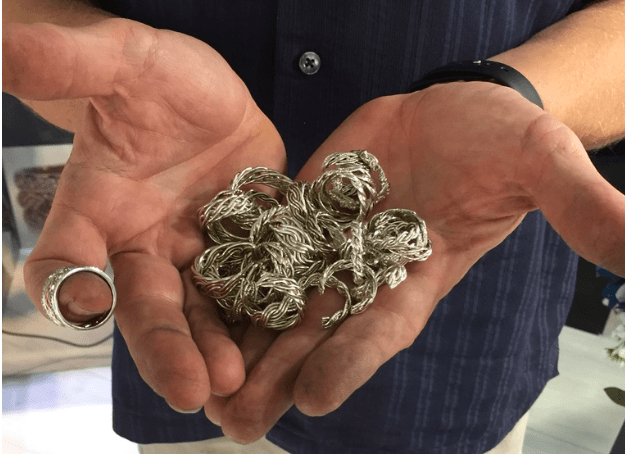 Culture vultures already know that Sarasota is a must-do. But it’s perhaps less common to make a trek to Sarasota just to shop. And that’s a shame, because a recent jaunt to the charming Main Street and St. Armands Circle shopping districts revealed a plethora of mercantile destinations that were not only unusual but also imbued with a sense of family — the perfect ambience for holiday shopping.

Throughout the coming week, we’ll be highlighting the shops we visited, starting with…

Lyra Neff tells me she’s tried to learn how to make the braided gold and silver rings her father, Todd Alan, is famous for.

“But my hands aren’t strong enough,” she says. “You have to have crazy strong gorilla hands.”

Todd has woven, by hand, “at least 15,000” of his trademark rings, says Lyra, yet “he still smiles when he braids. It just blows my mind.” The rings are often for weddings or commitment ceremonies, so bringing positive energy to the process is important. “He won’t make a ring if he’s in a negative head space.”

I spoke with Lyra by phone after visiting her father in his shop off St. Armands Circle. She began working with him when she was 8, helping to sell his jewelry at Renaissance fairs in Ohio. Now 28, with a college degree in advertising, she continues to partner with him in the business.

“People are always, ‘How do you work with your father? I’d kill mine,’” she laughs. But she’s clearly, and heartwarmingly, his biggest fan.

Todd, 56, came to jewelry via his other love, music: He’s a multi-talented musician (guitar, banjo, violin) with nine albums to his credit. “He was in a band,” says Lyra, “and was too poor to give his girlfriend jewelry. So he started making it for her.” Pretty soon he started selling it along with band merch, and when sales were better for the jewelry than the CDs he figured he’d found his real calling.

With his shoulder-length sandy hair and wire rims, Todd still looks the part of a guy who plays with a band. He’s at once warm, friendly and intense, his joy in what he does evident as he shows us around his shop. I ask him how long it takes him to make one of his braided rings. He answers, somewhat ruefully, “My ex-wife used to say, ‘1 hour and 25 years.’”

He calls himself “an old-style hand fabricator,” always beginning with raw metals. In the last five years, he’s become fascinated with another kind of raw material: seashells. Making wax molds from the shells that he then fills with gold, he’s able to capture “every single perfect imperfection of the original shell,” says Lyra.

The results are extraordinary — especially the $20,000 Shellscape necklace, a cluster of tiny golden shells, seahorses and coral that won a first place award in last year’s prestigious Sanibel Shell Show. (He’s interested in auctioning it off for the benefit of the Mote Marine Aquarium.) He’s also nearing completion of what may turn out to be his masterwork: a mermaid crown made of platinum, 18K green gold (a naturally occurring gold with greenish hue), and “more diamonds than you can count,” says Lyra.

But before that, another piece of jewelry took precedence. Lyra and her fiancée, Kate, just got engaged.

Guess who made the ring.