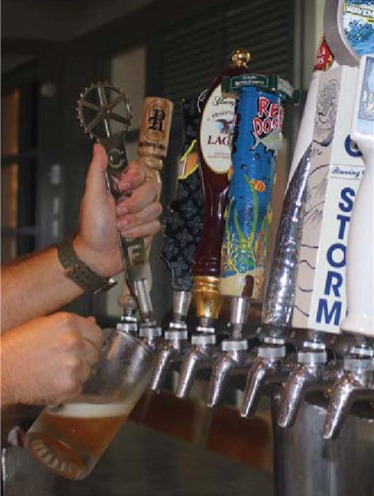 Move over wine, it’s beers turn to shine. Yes, drinking beer is chic, thanks to the craft beer explosion that mushroomed in California and Colorado, spreading hops like wildfire. MTheBrewers Guild of Florida says that although we are a latecomer to the craft beer scene, it’s predicted that soon Florida will boast 500 breweries estimated at $2.5 billion! Still not convinced? USF St. Petersburg introduced a

A Hoppy Marriage: Today, beer-friendly foods go beyond nuts and pretzels. National gastropubs (The Yard House, B.J.’s, Gordon Biersch) celebrate sudsy food/beer matches on their menus while local chefs whip up everything from barbecue to chili with a ribald stout or porter from one of Tampa Bay’s craft brewers.

Want to quell a spicy sandwich? Discover nirvana when you pair a 3 Daughters’ Beach Blond with a grilled chicken, bacon and Pepper Jack cheese wrap.

Beer/Food Pairing Pointers: Like wine, today’s pairings are no longer red for meat, white for seafood/chicken. Beer has a wide range of flavor characteristics, from bitter to sweet, and makes ingredients sing. Look for common flavors that echo but don’t overpower a dish, such as a spicy pale ale with a Thai dish. A hoppy beer has bitterness that cuts the heat in spicy foods while a stout’s smoky notes work well with ribs.

Our craft brewers recommend these pairings for your next party:

Health: How To Improve Your Social Appeal