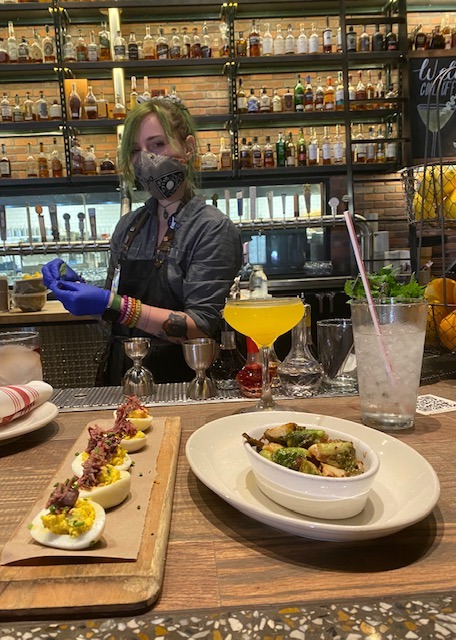 Stronger Than Before: These restaurants and bars are re-opening with success

When restaurants first re-opened this spring, it was odd to see their bars devoid of barstools — or of people, since restrictions didn’t yet allow bar seating.

But that changed earlier this month when Governor DeSantis gave the go-ahead for bars to open, making bar owners and patrons very happy.

On the first Friday night of re-opening, Carrollwood’s The Wine Shoppe was abuzz. People sat with friends, others social-distanced according to protocols, but all were in a celebratory mood as we welcomed back happy hour.

It started early; according to Misty, our server, there was a line waiting outside to get in when the Wine Shoppe opened the doors at 2 p.m.

Angela Kemner, a partner in The Wine Shoppe, said that bottled wine sales kept the business afloat during the shutdown, especially when she offered BOGO sales through social media. With that promotion she was able to sell over 100 bottles a week. Another offer — “Spend $100 and get a free bottle of Belle Glos Pinot Noir, a $55 bottle” — is ongoing.

Although the Wine Shoppe does sell wine for customers to take home, many people like to buy a bottle and sit at the shop’s gathering spaces, which are set up with white leather chairs and settees. Patrons also enjoy pouring specialty wines from its wine dispenser systems in increments of three, six and nine ounces.

When I checked in with Angela on June 13, she said they’d had their best week since opening last year.  It appears they are off to a great relaunch.

That was the case, too, with two other restaurants and a brewery I visited recently.

Olivia Restaurant, the new venture from Chef Chris Ponte in South Tampa, had been shut down for the last couple of months to keep its employees safe. The restaurant had only been re-opened for two weeks when bar restrictions were lifted, and Tyler Wolff, the sommelier, told me the ensuing weekend was very busy, serving 500 dinners on Friday and Saturday nights while maintaining 50% capacity. It was as if people felt that they could finally go out and dine in again.

The restaurant was well-prepared for the new safety guidelines. Wolff pointed out the extra space between stools in the bar area and the makeshift extension that had been added for gatherings of three or four. Tables had also been moved farther apart to accommodate social distancing for diners. The servers all wore masks and gloves, and my hands were sprayed with hand sanitizer before I was allowed to walk in. But everyone from servers to customers seemed very happy to be there.

UPDATE: On Mon. June 22, Olivia announced on its Facebook page that it would be closing “for two or three days” after being informed that an employee had tested positive for COVID-19. The employee had not worked since June 13 and has been quarantined. Plans are to reopen on Thursday 6/25.

Bar areas both inside and outside figure prominently at Whiskey Cake. With its whiskey and bourbon choices filling numerous glass shelves up to the ceiling, it’s hard to think of this International Plaza spot as not as a bar, although the food is delicious as well.

I purchased a Quarantine Kit from Whiskey Cake when the restaurant was doing takeout but hadn’t been back since they reopened for indoor dining. Rebecca Shaw, one of the managers, told me they’ve been busy ever since and even more so since bars officially opened. During my visit, the phone at the front never stopped ringing.

In keeping with the new normal, all of the servers were wearing masks and gloves throughout the restaurant, and pairs of stools had been set up 6 feet apart at the bar. I loved the signage reminding patrons of the distancing rule.

An innovation I hadn’t seen before was the use of a bar code to pull up the menu digitally. The bar code was strategically located on the bar so that you could easily scan your phone over it without having to consult a paper menu.

Rebecca emphasized that everyone who has called or come in has expressed how happy they were that Whiskey Cake was open again.

That sentiment was echoed by Leigh Harting of 3 Daughters Brewing. Since they sell food at the brewery, they were able to open on May 11; many other breweries were unable to open until bars were given the okay because food sales are not part of their business.

When 3 Daughters re-opened, they replaced barstools with tables to create a fast and casual area for people to enjoy their food and beer in the 18,000-square-foot facility. But people could also pick up BOGO six-packs of beer. Virtual tastings enabled customers to share in a beer experience at home.

Leigh explained that 3 Daughters has used its downtime to rethink the business. The shutdown in March forced them to furlough 49 people, a decision she said was devastating. But luckily, 2 ½ weeks later they were able to bring everyone back thanks to PPP funds.

With needs changing, she and her husband, Mike Harting, temporarily shifted the brewery’s focus from beer to hand sanitizer and ended up donating over 10,000 gallons. Mike is in the Florida Brewers Guild and makes sure they are interpreting the law and following the right mandates upon opening. 3 Daughters have also been trying to help breweries who weren’t able to open right away.

Each of these owners/managers have so far weathered the storm, reworked their business models to keep offering customers wonderful products, and helped others during the shutdown. Now they are back open and stronger than before.

B is for Beauty: Caring for heads and hands with a whole lotta heart