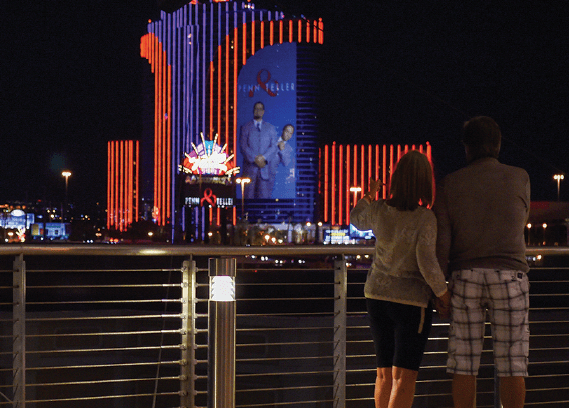 You know Las Vegas by a million names: sleepy cowboytown, America’s Monte Carlo, Sin City, Disneyland in the desert and showroom for the stars. Today’s Las Vegas is the world mecca for showgirls, show-stopping entertainment and so much more.

This desert destination boasts no humidity. When Vegas heats up, the casinos cool down so a summer sojourn here is no sweat. With 42 non-stops weekly from Tampa International on Southwest, Spirit and Frontier Airlines, it’s easy to escape for a couple of days. Skip car rental hassles and newly imposed parking fees; grab Uber, Lyft or a cab.

New: Momofuku (Asian) and Zumu (Japanese) at hip Cosmopolitan Hotel on the Strip.

Bodacious Buffet: Dinner at Bellagio, 3 pm to 10 pm. For high rollers: DANCE. High energy, calorie burning nightclubbing at The Light in Mandalay Bay, TAO at the Venetian, Hyde at Bellagio, Hakkasan at MGM Grand, 10AK at the Mirage, Marquee at Cosmopolitan, Omnia at Caesars Palace. There are countless smaller local clubs but it’s wiser to party in style on the Strip.

New Vegas: Seven thrilling Cirque du Soleil shows on the Strip. Michael Jackson ONE at Mandalay Bay, The Beatles Love at The Mirage, Mystere at Treasure Island, O at Bellagio. Plus, there’s Penn and Teller at the Rio and for pleasures of the flesh, Zumanity at New York New York. That’s just for starters. Someone and some shows perform somewhere in this town round the clock.

•80/20 Blues & Jazz Club on Flamingo Road which has a bit of Chicago in the desert feel.

•Dispensary Lounge on E. Tropicana Avenue for jazz and blues.

•Ron Decar’s Event Center downtown which includes a show and a buffet dinner.

For sheer spectacle, superb service and comfy rooms, Wynn’s my first choice. My longtime go-to is the Rio All-Suite Hotel and Casino, just off-strip, with huge rooms, expert service and views. Five-star Venetian is a great escape with surprisingly reasonable rates. Unabashed luxury: The Palazzo and the sleek Aria Resort and

Casino. Or go Vegas retro and book the historic Flamingo where mobster Bugsy Siegel started it all in 1946 and died by the bullet a year later.