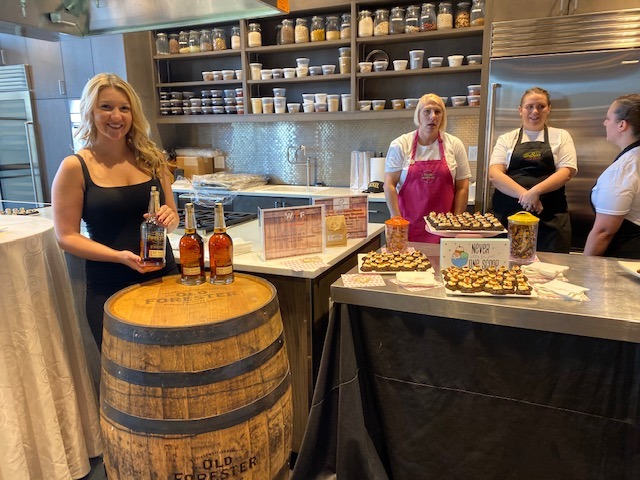 Desserts made with Old Forester inside the Epicurean Theatre.
Food & Drink

Walkin' in a Whiskey Wonderland: What I discovered at the Whiskey Tampa Foxtrot Fest

Bern’s Steak House held its third annual Whiskey Tampa Foxtrot Fest from November 6-9 with unique dinners, tastings, and classes for whiskey lovers. These were hosted throughout the week at The Epicurean Hotel, Haven Restaurant and Bern’s Steak House. This year they also celebrated Women in Whiskey, who help propel the industry forward. Proceeds from the event benefited the Jackson in Action 83 Foundation in support of military families, Operation First Response, and the Southeastern Guide Dogs organization. I loved that these were the three charities chosen to be showcased over the pre-Veteran’s Day holiday weekend, each one supporting men and women who have given of themselves for our country.

On Saturday, the VIP Grand Tasting at the Epicurean Hotel was a culmination of the week’s events, featuring more than 200 hand-crafted whiskeys. VIPs were welcomed at the door at noon and people were clamoring to get in. Greeters gave each guest a brandy glass for tasting their way through the hotel.  I had wondered how a Whiskey Fest would work inside a boutique hotel, but it was set up, masterfully, like a scavenger hunt. With map in hand listing the high-end whiskey purveyors on the premises, I explored the various stops along the trail.

In the alcove off the entryway, several tables were set up to sip and explore. Just outside the Epicurean Theatre was a table featuring exclusive whiskeys created specifically for Bern’s and Haven. Inside the theatre, I discovered the Whiskey and Chocolate Lounge, which featured desserts made from Old Forester Kentucky bourbon.

I then wandered through the bar area to a petite ballroom where tables lined every inch of the four walls and high-top tables were scattered in the center for standing and sipping. Along one corner Jackson in Action 83 Foundation showcased its work and sold various items to support their efforts. Slipping out of the ballroom, I followed arrows out to the pool area, where tents sheltered guests from the sun and showcased additional whiskey vendors.

Talking with the different companies, I learned how similar the aging of whiskey and bourbon is to port, and how some brands are now aging their whiskey in port and cabernet casks. I discovered that one company is even infusing different wine varieties into their liquor. Of course, the bourbons that were aged longer were the smoothest among the varieties that I sampled.

Buddy Brew coffee was also on hand, adding their own personal twist to the event with bourbon barreled coffee and spiked lemonade. At the Southeastern Guide Dogs display, I stopped to pet some of their beautiful animals and learned more about the organization. Then, following the arrows toward the rooftop patio, I continued the scavenger hunt, with each area more interesting than the next.

I reached the patio to find a wonderful party in the South Tampa sunshine, with food and drink stations and hand-rolled cigars by J.C. Newman. On this top floor I enjoyed a Makers 46 barrel finished bourbon with oak staves and the Rough Rider brand with two varieties that intrigued me, one very soft and smooth, that had been housed in a Chardonnay barrel from Long Island, and a Sonoma Bourbon Whiskey, Sonoma being my favorite California wine region.

What I enjoyed the most were the vendors that created mixed drinks with their bourbon. My favorite was the Longbranch Smash, a mixture of Longbranch Bourbon with mint and spiced lemon cordial. Longbranch, a bourbon whiskey that is oak and Texas Mesquite charcoal refined, also has Matthew McConaughey attached to the brand, which made it that much more attractive.

Throughout the event people in Laxer Family Foundation shirts walked around with tablets in hand to take orders for bottles of whiskey guests couldn’t live without. These bottles could be picked up at either Bern’s Fine Wines and Spirits shop in the hotel or shipped directly to their home.

For whiskey lovers, this is a festival not to be missed. As with everything that Bern’s creates, the event was well thought-out, with wonderful touches of class and luxury. For only being in its third year, it appears to have been a huge success and I look forward to enjoying it again next year.

The Dysautonomia Project’s Under the Umbrella Gala