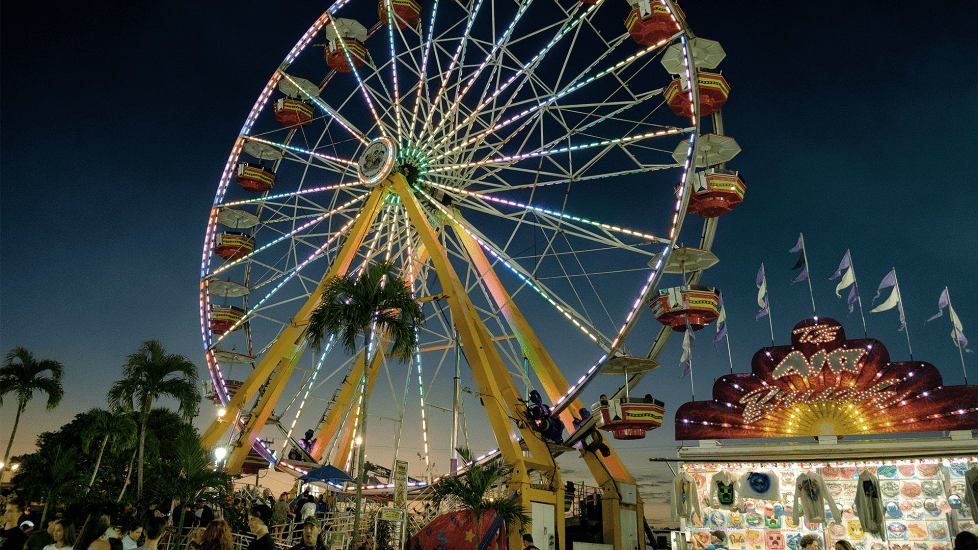 Jump on a ferris wheel in Plant City, sample cuisines at a theme park, shop top artists virtually or enjoy chamber music in your living room. You can do it all!

Florida Strawberry Festival. In keeping with the times, Plant City’s celebration of its favorite berry morphs from big-name-concert-series-and-oh-by-the-way-there-are-strawberries mode back to its country-fair roots, focusing on livestock shows, carnival rides and mountains of strawberry shortcake. There will be musical entertainment, but this time it’s resolutely local, like the rousing R&B gospel of Pastor Calvin “Pee Wee” Callins and “Florida’s Frank Sinatra” Don Juceam. Through Mar. 14, 303 BerryFest Place, Plant City, 813-752-9194, FLstrawberryfestival.com.

Gasparilla Festival of the Arts

Browsing for art in Curtis Hixon Park on a pristine day in March is a memory we’ll have to cherish till the live Gasparilla festival returns next year (we hope). But in the meantime the virtual version this weekend is offering some exciting alternatives, including live artist demos, live interactive roundtables and streamed musical performances. Plus, the shopping days have been extended so you’ll have even more time to satisfy your browsing (and buying) habit. Free online programmed events, Mar. 6-7; online shopping through Mar. 21, gasparillaarts.com.

Tampa Bay Beer Week. You won’t see thousands of thirsty beerhounds gathering for mega-events in this year’s Beer Week. Instead, local brewers are holding smaller get-togethers — eight days of events, education, and continued support for local brewers and their staffs, especially those whose businesses may have suffered during the pandemic. Mar. 6-14. See the complete calendar of events at tampabaybeerweek.com/beer-week.

Bolster your Busch Gardens experience through Apr. 25 with a smorgasbord of culinary delights, including such tasty-sounding samplings as Five-Spice Duck Lettuce Wraps, Seasoned Brisket Pub Chips and Hummingbird Donuts, as well as wine, beer and specialty cocktails like the Hungry Elephant (Amarula African Cream Liqueur, Kula Dark Rum, coconut and pineapple). Over 110 items in all, and food costs are not covered with park admission, but you do get free limited-capacity concerts on Saturdays, kicking off this Saturday, March 6, with American Idol favorite Phillip Phillips. Info on food & wine menus here; info on concerts here.

If you are one of those music fans who sorely miss the sublime performances of the Palladium Chamber Players, this one’s for you. You won’t be able to attend in person, but you can stream a live performance Friday night by three of the Players’ (and the world’s) best: violinist (and Florida Orchestra concertmaster) Jeffrey Multer, cellist Julian Schwarz, and pianist Marika Bournaki as the Mile-End Trio. Their hour-long performance will feature works in the piano trio repertoire by Beethoven, Faure, Dvořák, and more. Fri., Mar. 5, 8 p.m. For details on tickets and how to watch the livestream, go to mypalladium.org. Buy tickets here.

Tarpon Arts promises a trip on “The Roller Coaster Called Love” in this charming romantic comedy by John Cariani. Structured as a series of vignettes, it’s set in the town of Almost, Maine — a place so far north it’s almost not in the U.S. With the northern lights hovering, residents of this almost-a-town find themselves falling in and out of love in unexpected, hilarious ways. March 5-7, 12-14, 20 at Heritage Museum, 100 Beekman Lane (Craig Park), Tarpon Springs.

I remember the first Lights on Tampa in 2006. The buzz in the air, the thrilling art installations, the crowds of people on the streets — it felt like Tampa was, well, a city. Fifteen years later, the city part is pretty much a given, and it’s not news anymore to see people strolling about downtown at night. But, with crowds being problematic at the moment, Lights On Tampa 2021 is self-guided, with choose-your-own-adventure interactive maps to nearly 30 new and existing works of art and pop-up dance and music performances along the way. Mar. 5-6, 6-9 p.m., lightsontampa.org.

If you’re strolling about looking at the pretty lights on Friday night, rest a bit by the Straz and enjoy free live entertainment on its Riverwalk Stage, hosted by the effervescent hosts of the arts center’s Tampa Total Request Live show, Zachary Hines and Roxanne Gallo. Local and regional performers who’ve been guests on TTRL will be on the bill, including singer/songwriters Mwiza Simfukwe and Claire Vandiver along with neo-soul singer/songwriter NDO. Fri., March 5. Seating area opens and table service begins at 6 p.m. Concert begins at 7 p.m. strazcenter.org.

An unexpected pleasure in the midst of all the restrictions placed upon theaters has been the bounty of online shows starring single performers. Two of the best are on view right now. I’ve mentioned before the versatility and power of Andresia Moseley in Anna Deavere Smith’s docu-play Twilight: Los Angeles, 1992; it’s streaming through Mar. 9 at jobsitetheater.org. Add to your must-see list L. Peter Callender’s performance as Louis Armstrong and two other pivotal characters in Satchmo at the Waldorf, livestreaming at americanstage.org and extended by popular demand through March 7. Callender’s remarkable performance and Terry Teachout’s thoughtful script capture both the conviction and the compromises that marked Armstrong’s legendary career, allowing us to see the forces he was up against but also the sheer joy he felt in playing the trumpet. The production — set, lighting, editing and Ted Lange’s direction — is impeccable. Bravo.