The cast of "Ain't Too Proud" singing "I Wish It Would Rain."
Things to Do Weekend Top 10

“Something’s happening here,” as Buffalo Springfield once sang. So this weekend’s top 10, in addition to listing notable arts & entertainment events (some of which are actually live and in person, not just online), I’m including a bunch of resources recently shared by local media that illuminate black lives, black businesses and black expression. Listen, watch, learn — we all need to do that, especially if we’re not BIPOC (look it up).

Use the Green Book. The 2019 Oscar-winning flick brought renewed attention to the Negro Motorist Green-Book, called “the bible of black travel during Jim Crow,” a guide for African-American travelers to the businesses that would welcome them (and the ones that wouldn’t). Now two local educators, Hillary Van Dyke, who is black, and Joshua Bean, who is white, have updated the concept to create a Green Book for the 21st century: greenbooktampabay.org, an online list of black-owned businesses as well as related non-profits, historical and cultural sites in Tampa Bay. The idea, said Bean in an in-depth interview on St. Pete Catalyst, was to “not only improve circulation of black dollars in the black community, but circulation of dollars by people who look like me, as a white male — just really wanting other people to invest in the black community as well.”
Read the Times‘s “How you can support the black community at home.”  If you saw “75 Things White People Can Do for Racial Justice” on Facebook and found it a tad daunting, the Tampa Bay Times‘s Gabrielle Calise has put together a compendium of similar tips that’s a lot more user-friendly. Tapping into advice from Hillary Van Dyke and other community resources, she’s organized her info under the headings “If you have five minutes,” “If you have a few hours..” and “If you can set aside time each week…” and links to everything from petitions to museums to booklists to free coursework from Yale. (And yes, the “75 Things” list is in there.)
And read the Times‘s list of Tampa Bay black-owned restaurants and food businesses, too. Then give in to your growling stomach and go get something tasty from 7th & Grove or Lorene’s Fish House or Al’s Finger Licking Bar-B-Que or any of the other 12 spots on the list.

Enjoy what the Straz is sharing online. The Straz Center’s The Show Must Go On newsletters and podcasts have been a reliable source of online entertainment for weeks now, but this week’s edition was particularly on target. The materials shared included NaTasha Yvette Williams’s exquisite rendition of “Hope”  by Jason Robert Brown; the cast of the hit Temptations musical Ain’t Too Proud singing a heartfelt “I Wish It Would Rain”; and Hope Boykin of Alvin Ailey American Dance Theater reading her poem  “When our hearts break, We DANCE” as Ailey dancers interpreted her words with passionate, committed movement. (The Ailey clip led me to check out the dance company’s website and its Ailey All Access features, including a video of  “Ode,” a gorgeous, heartbreaking dance about gun violence that premiered last December but is sadly more relevant than ever.)

Visit the galleries of St. Pete. The St. Petersburg Arts Alliance would usually be hosting an ArtWalk on June’s second Saturday, but not all of the participating galleries are open for in-person visits just yet; they’re accessible only via their websites. But some spaces will be opening up for the first time in a long while, so if you’re up for venturing out and seeing some art, you should have many options to choose from.

Watch “Offstage: Opening Night.” With Broadway theaters shuttered at least through Labor Day, the New York Times is making a valiant effort to feed the stage-starved with this online event on Thurs. June 11 at 7 p.m. featuring some of the past season’s biggest stars in songs, stories and conversation. Goodies include Patti LuPone, Katrina Lenk and cast performing the opening number of Company; Mary-Louise Parker doing a monologue from The Sound Inside (saw it before it closed, she was brilliant as usual); Elizabeth Stanley singing a song from the Alanis Morissette musical Jagged Little Pill, and lots more. It’s free, but you have to R.S.V.P. to get the link to the show.

Laugh with a Zoomcast of Shakespeare’s Comedy of Errors.

American Stage launched its virtual Shakespeare Lite series last Sunday with a remarkably effective and affecting hour-long Romeo & Juliet, complete with swordfights between Zoom boxes, poison vials passed from one box to another, and death scenes for characters you dearly hope won’t die despite their having done so every other 100 times you’ve seen it. This week the action shifts from heart-rending tragedy to mistaken-identity farce with The Comedy of Errors, a mixed-up mess of identical twins, their identical servants and the trouble they all get into. Having once played the twin Antipholuses (Antipholi?), I’m eager to see how the play works in an abridged version (I suspect it’ll work better) and anticipate much Zoomin’ fun. Sunday afternoon at 2 p.m.; it’s free, but you have to register here.

Sob along with St. Petersburg Opera’s La Traviata.  Speaking of deaths you dearly hope won’t happen, Violetta (cough, cough) is the doomed heroine of Verdi’s La Traviata, but she succumbs so beautifully that you can’t help but watch (and besides, she gets to sing some of Verdi’s most immortal arias on the way out). Enjoy St. Pete Opera’s latest offering in its “Opera & Chill” series through June 14.

Bike along with the rescheduled Coronavirus Dance. Postponed from last weekend due to rain: Innovative choreographers Andee Scott and Amanda Sieradzki launch a new dance series this weekend geared to the era of social distancing, Dance in the Time of Coronavirus. In “Episode #1: Reverberation,” dancers will line up 10 feet apart along the sidewalk on 1st. Ave. S. between 27th and 23rd streets beginning at 11 a.m. on Sat. June 13, and audiences can either watch the dance unfold as they ride along on bicycles in the designated bike lane or view it from the sidewalk across the street (enter at 1st Ave. S. & 27th St., admission free). The event lasts an hour, but it’s billed as a “durational” dance, meaning there’s no official beginning or ending; it loops approximately every 10 minutes, so you can join the fun at any time from 11 to noon 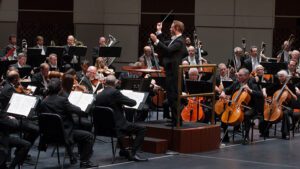 Listen to WSMR’s last Florida Orchestra concert of the season. Going out on a joyous note (or notes), WSMR concludes its season of TFO broadcasts with Beethoven’s scintillating Piano Concerto No. 4, recorded in 2016 with Music Director Michael Francis conducting and Shai Wosner at the piano, and Brahms’s Symphony No. 2, conducted by Günther Herbig in 2010. Thurs., June 11, at 7 p.m. on WSMR 89.1 and 103.9 FM radio or stream online at WSMR.

dR Daily 6/9-10: Insights from St. Pete's past at the Florida Holocaust Museum