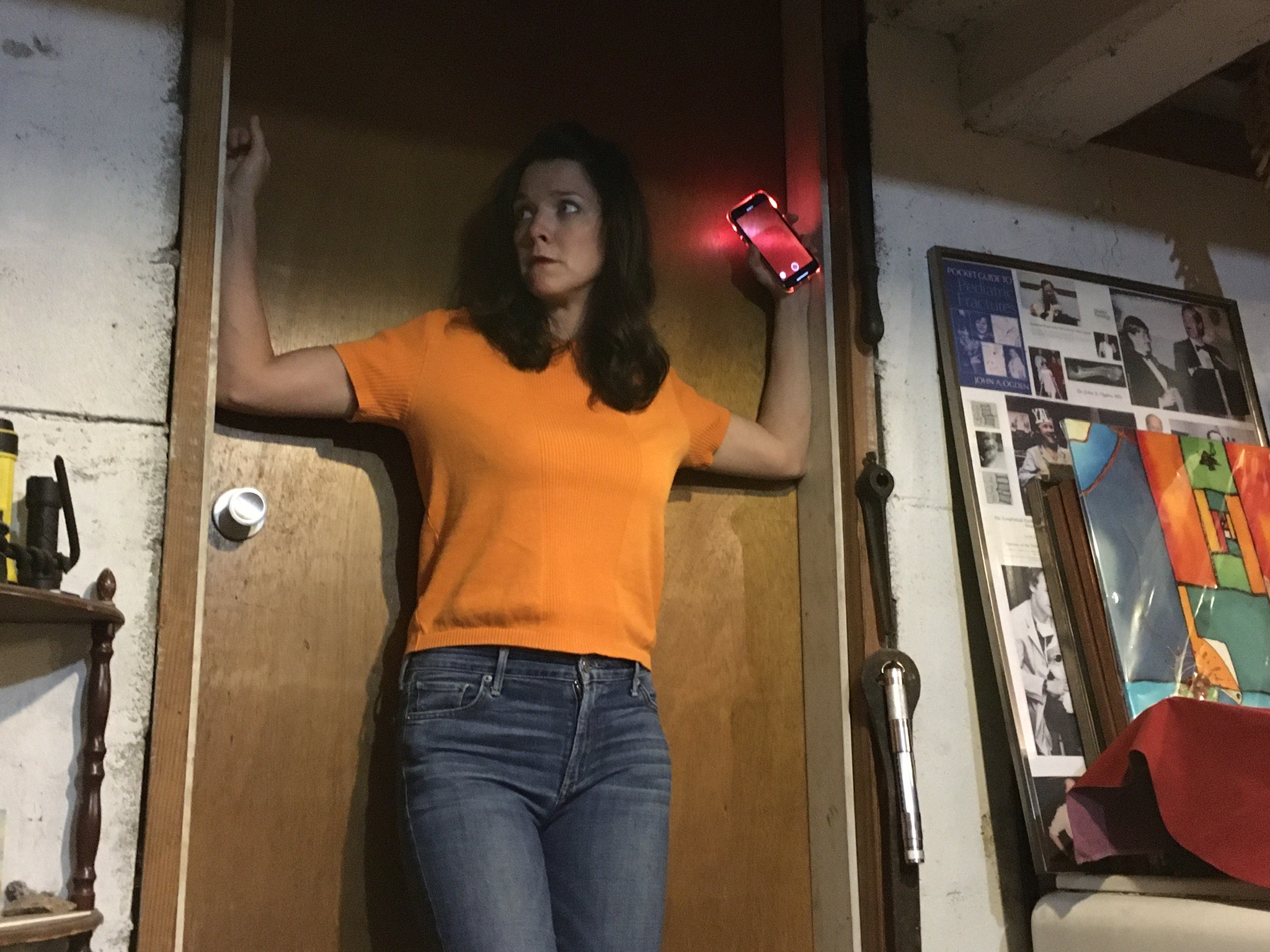 July 9 & July 11: Natural Shocks by Innovocative Theatre. An online production of a solo performance piece by the most-produced living playwright in America, Lauren Gunderson (Silent Sky, The Revolutionists), in which a woman livestreams from her basement as a tornado approaches. Marie-Claude Tremblay stars. Performances are on Thursday at 8 p.m. and Saturday at 9 p.m., tickets are $10 on Eventbrite or go to innovocativetheatre.com. After Thursday’s show there’s a talkback with Gunderson, Tremblay and director Staci Sabarsky. UPDATE: I saw Thursday’s premiere, and it was riveting. Tremblay gives a bravura performance in a script that’s as twisty and unpredictable as a tornado and works better, I suspect, in this livestreamed format than it would on stage. Don’t miss it. FULL DISCLOSURE: I was slated to appear with Tremblay on stage this summer in Innovocative’s production of Boy Gets Girl (I was going to play a magazine editor, big stretch), but we never got past an on-line read-thru; the show was canceled due to the pandemic.

7/9: Florida Sings Showtunes: Songs from Gypsy. Fans of the powerhouse singer/actor Becca McCoy who didn’t see her as Mama Rose in TheatreZone’s Gypsy in Naples get another chance tonight in this online revue. Joining McCoy to sing songs from the classic Jule Styne/Steven Sondheim musical is an all-star lineup including local favorites Larry Alexander and Laura Hodos. Thursday, July 9 at 7 p.m. on YouTube.

July 9: The Gabber Returns! Florida’s oldest independent weekly newspaper looked to be a goner for a while, but now it’s back on the streets of Gulfport with a new owner/publisher, Cathy Salustri Loper, and a fresh new look courtesy of Creative Director Joey Neill. The team has already zapped life into the online edition, and now they get to do the same in print. Long live The Gabber!

July 9: New Shorts at American Stage. The second installment in American Stage’s online series of short plays, tonight’s double bill features The Magicians Used to Go Here by Emily Dendinger (Will card tricks be enough for Peter to keep Laura forever?) and Survival Strategy by Donna Hoke (Jenny and Jerry hatch a plan to get their cuddle fix), both directed by L. Peter Callender. Prior to the performance, special guest emcees Willi Rudowsky and Hal Freedman will serve up a cocktail tutorial and a theatre trivia contest. There will be prizes!

July 9: Alvin Ailey’s Juba. The first work Artistic Director Robert Battle created for Alvin Ailey American Dance Theater makes its online premiere this week. The work is a thrill ride through ritual and folk tradition set to an original score for string quartet and percussion by John Mackey. Watch Juba starting Thurs. July 8 at 7 p.m. It will be available to watch for free on Facebook, YouTube and Instagram until Thursday, July 16 at 6:30 p.m.

July 9-Aug. 29: Jacob’s Pillow Virtual Festival. The mecca for modern dance in the Berkshires isn’t hosting live performances this summer, but they’re going for the next best thing: a free virtual festival. The opening weekend’s attractions include a video of 2018 performances by the Limón Dance Company (July 9, 7 p.m.); a Zoom dance class for all ages in the first installment of Families Dance Together (July 10, 3-4 p.m.); and a conversation with Street Dance Activism Scholar Dr. Shamell Bell (July 10, 5 p.m.).

July 11: Dance in the Time of Coronavirus: Episode#3: Volution on Davis Islands. The outdoor, socially distanced dance series that’s been making heads turn on the streets of St. Pete moves across the bay on Saturday to Davis Islands in Tampa. Choreographed by Amanda Sieradzki, Volution is a meditative dance work performed by a cast of 20 dancers along Davis Islands’ Seaplane Basin Park & Bike Path. The audience may observe the piece by entering either along Severn Ave. or at the start of the Seaplane Basin park, either on bicycles or as pedestrians, and watch the dance unfold as they pass by. This is a durational dance, meaning there is no official “beginning” or “end” other than the hour mark; it runs continuously from 11 a.m.-12 p.m., and the audience is welcome to join at any time during the hour on July 11.

freeFall Theatre’s Outside the Box. Reminiscent of those videos in which people go nuts when they open a box of new Star Wars collectibles, freeFall had the inspired notion of sending iconic items from past shows to the actors who used them onstage, and we get to watch (and reminisce along with them) as they discover what they’ve been sent. This week, Trenell Mooring finds a small trove of mementos from The Little Prince (including a particularly cherished pair of overalls).

TFO at Home: Inside Beethoven’s Symphony #7. A new video series from the Florida Orchestra in which musicians break down the best parts of Beethoven’s triumphant Symphony #7 by section (strings, brass, etc.) and also tell us about the parts they like to play the best. (Concertmaster Jeffrey Multer, for instance, explains why the Scherzo shows off Beethoven as the king of crazy.) The orchestra promises you’ll never listen to this symphony the same way again.

Nick Cordero in Bullets over Broadway. The dynamic singer/actor/dancer who died recently of COVID-19 at the age of 41 is remembered in this video shared by the New York Times. It’s from a performance in NYC’s Bryant Park with Zach Braff, his co-star in Bullets over Broadway, a musical adaptation of the Woody Allen film; Cordero was nominated for a Tony for his role as a gangster/wannabe playwright. (Note the Sarasota County promo on the backdrop.)