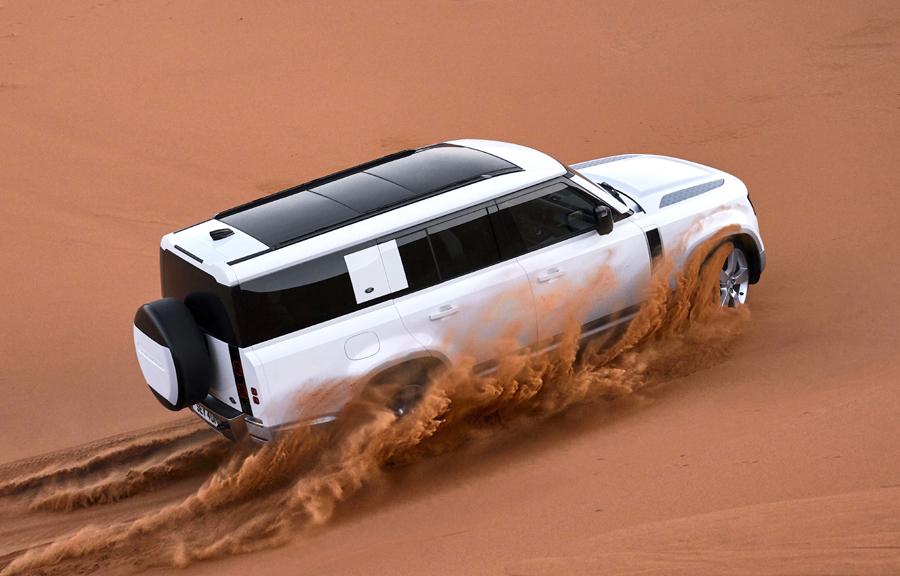 It happens every time I climb behind the wheel of a new Land Rover Defender. Suddenly I’m transported to the African bush, cuddling lions, while singing the words of Born Free with Matt Monro. 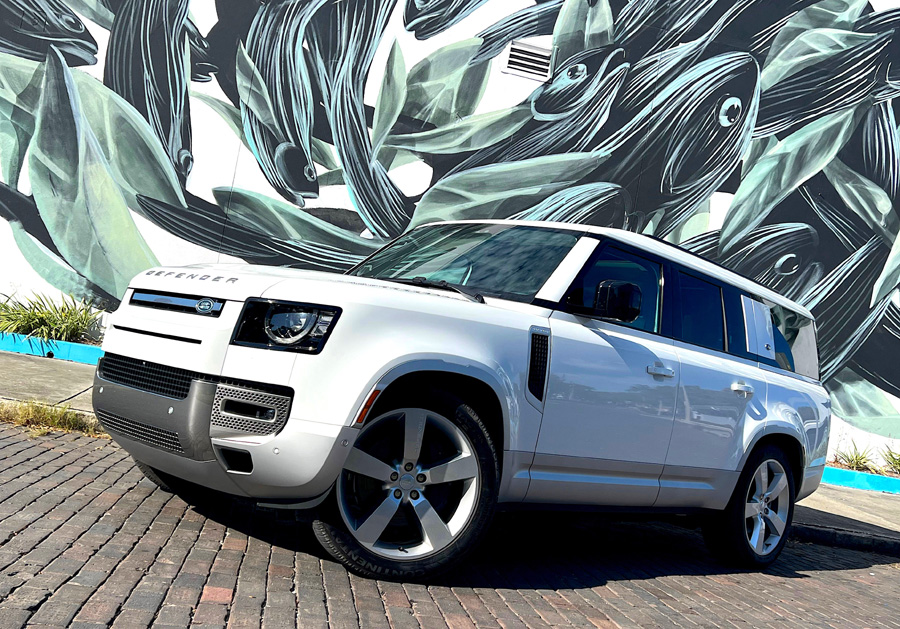 Which is a little odd considering that right now I’m parked outside Trader Joe’s in St. Pete, waiting for my better half to arrive with the groceries. 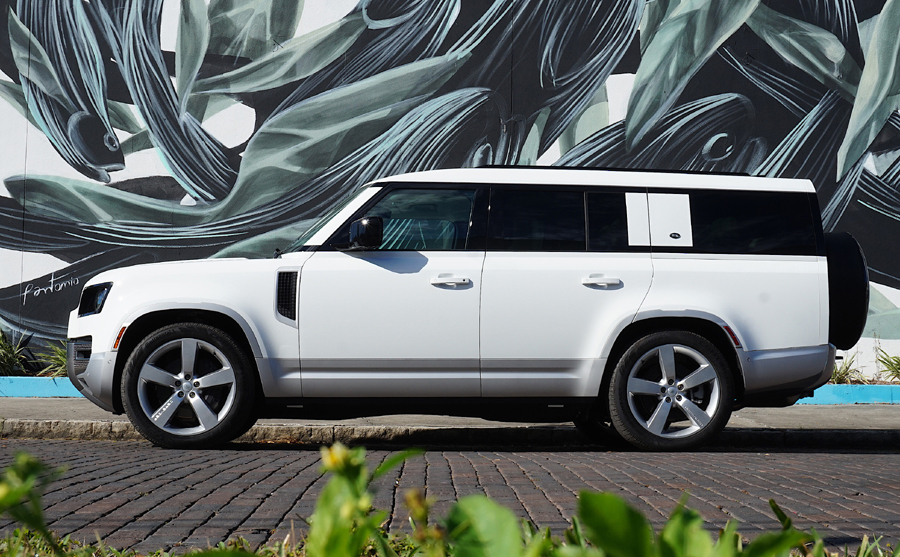 Since the arrival of the all-new Defender in 2020, Land Rover lovers have been able to visualize grand adventures to distant parts. Or at least Big Cat Rescue in north Tampa, or Busch Gardens. 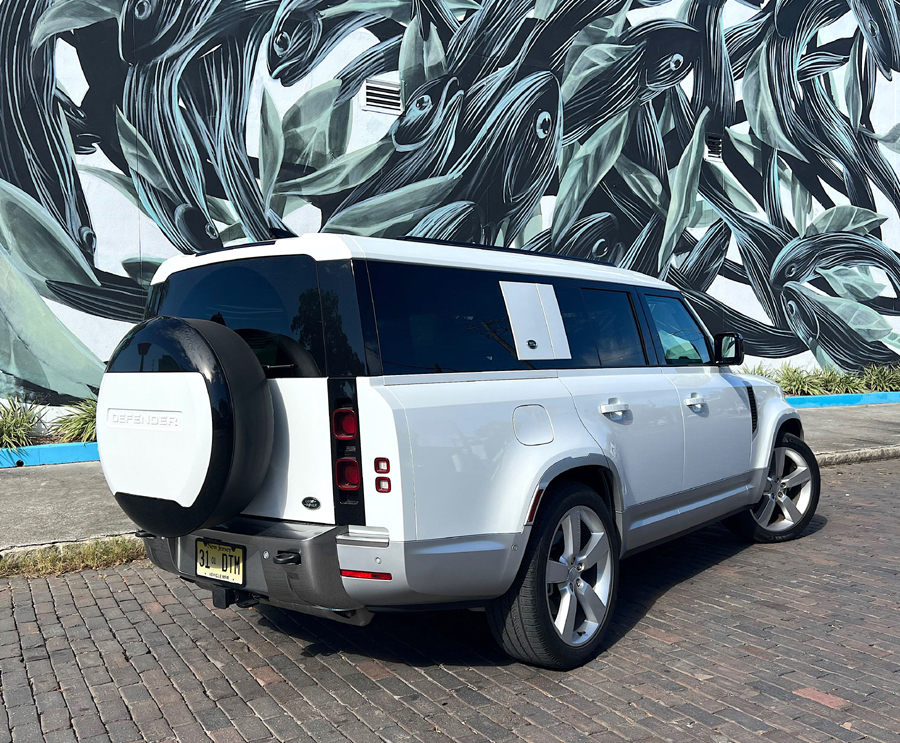 While the new Defender line-up included a two-door 90 and longer 110 model, what was missing was a proper three-row, eight-seat version to share adventures with friends and family. 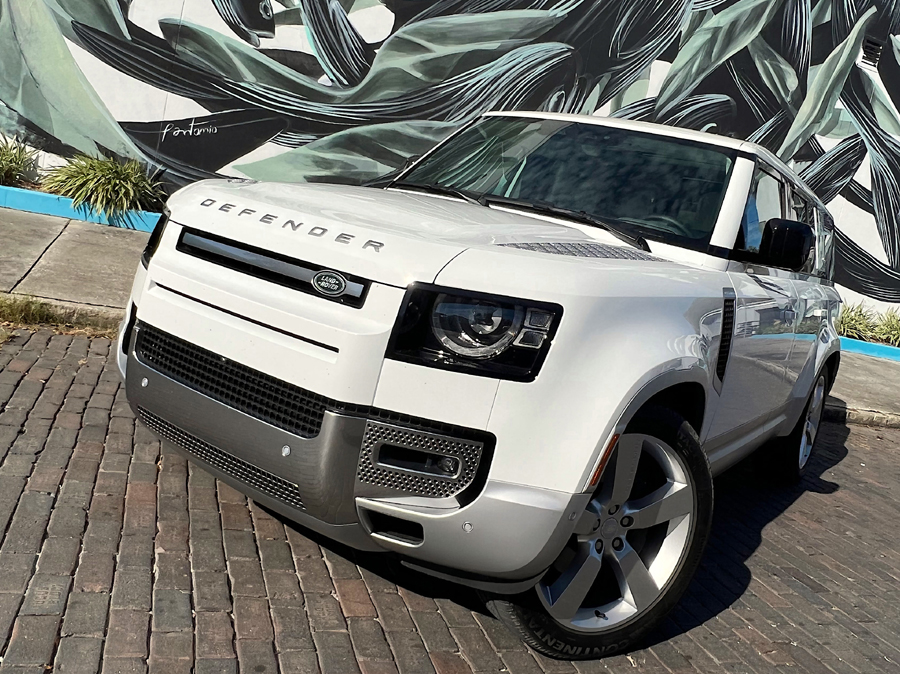 That’s all-changed with the arrival of the new 2023 Defender 130, with its three rows of seats and a body that looks like it’s been stretched like a lump of saltwater taffy. 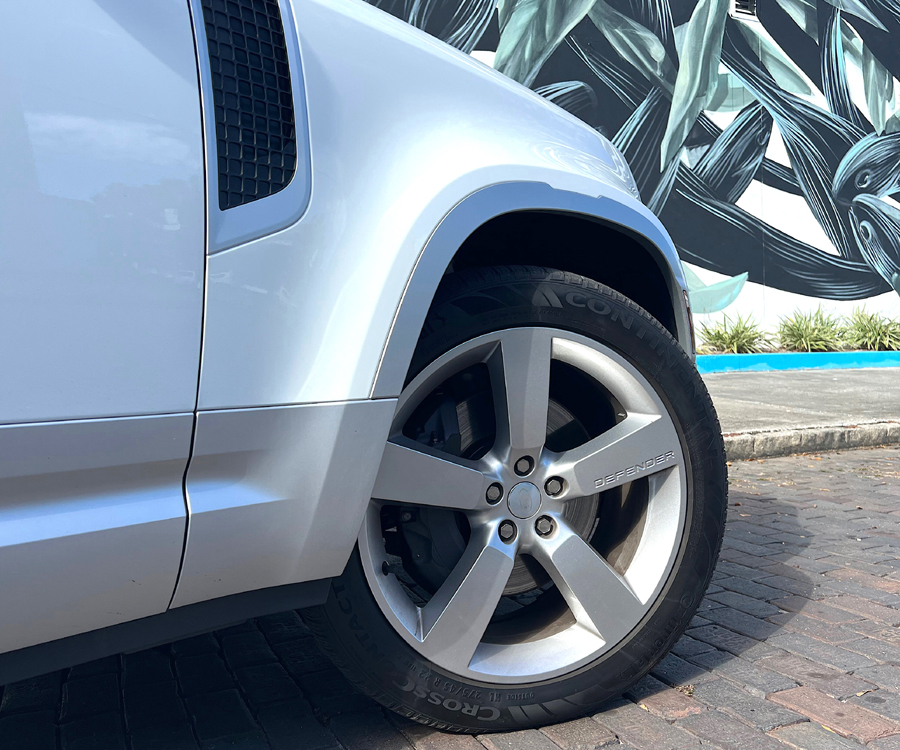 But space is good, and this new Defender 130 I’ve been driving has space for a proper, adult-sized, three-across third row way in the back.

And it’s a seat that doesn’t skimp on creature comforts. Back there you’ll find cup holders, armrests, storage nooks, dedicated ventilation, and even heated cushions. It even comes with its own glass roof panel to flood the area with light. 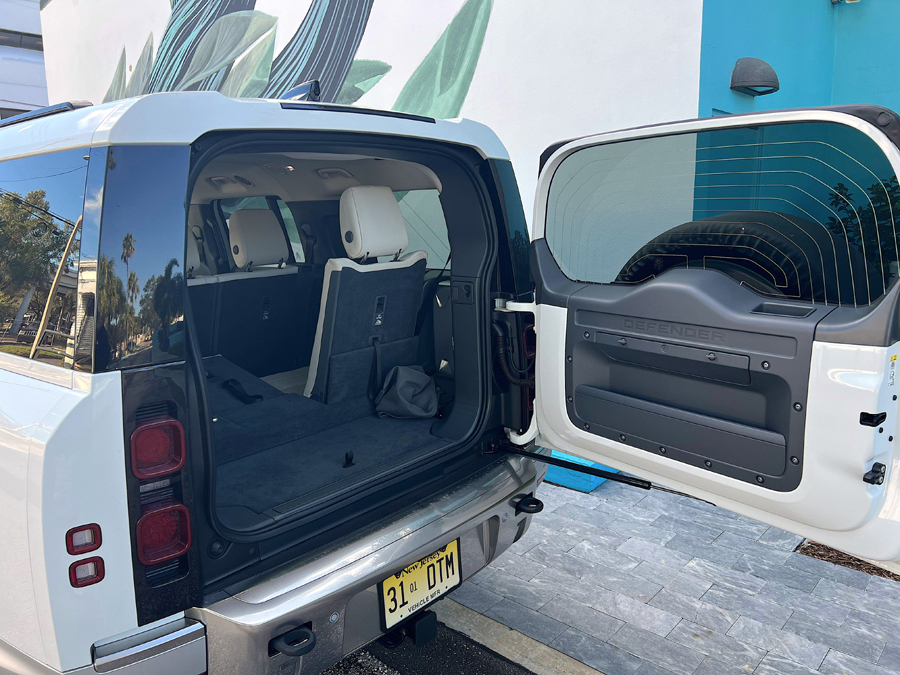 OK, clambering back there needs a certain dexterity, robust knees and good articulation. So it might not be a good idea to get your 90-year-old grandma to clamber back there. Kids though, will have no problem.

The 130 itself is based on the 110, sharing the same wheelbase, but with its body stretched by 13.4 inches. Now, nose to tail, the Defender 130 measures an impressive 211 inches, which is pretty much the same as a standard-wheelbase Cadillac Escalade.

But those extra inches do wonders for the Defender’s load-carrying abilities. As we know, every adventure means carrying lots of stuff, and with that third row folded flat, there’s room for over 43 cubic feet of gear.

Now fold down rows two and three and the space swells to a cavernous 80.9 cubic feet. Expeditions to Everest have carried less. 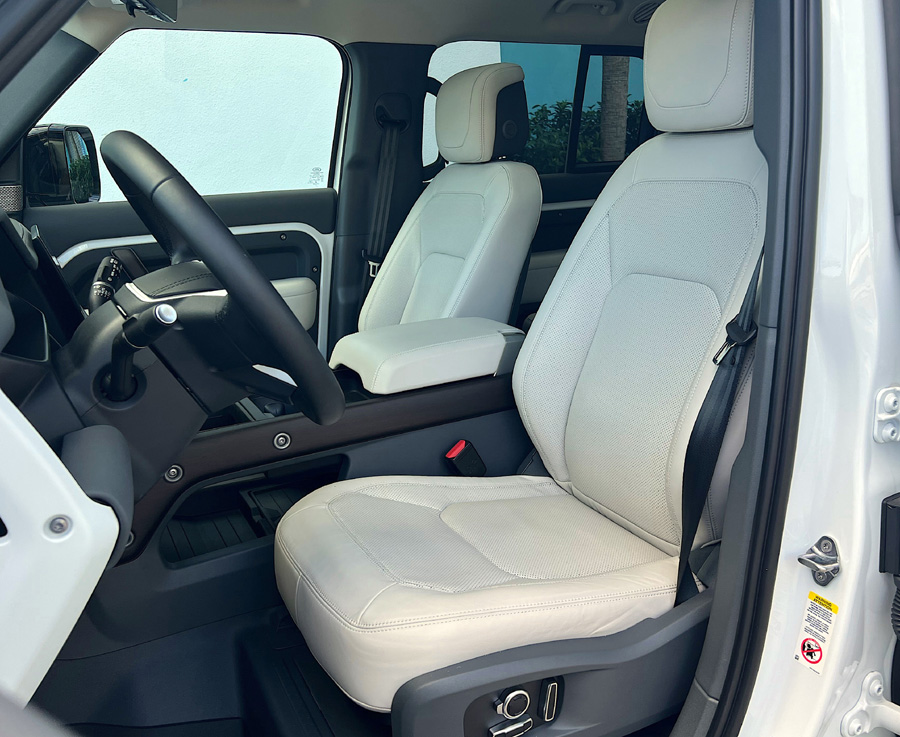 Slightly disappointing is that all the seat folding is done manually, compared to plenty of luxury rivals that come with power-folding. That and the rather meager 13.7 cubic feet of space on offer with the third row in place.

Inside, this new 130 has a simplistic elegance about it, with lots of lovely soft leather on the seats and soft-touch plastics on the doors and dash. Utilitarian it’s not.

As for propulsion, there’s a turbo-boosted 3.0-liter inline-six that comes either with 295 horsepower (just on the base S model), or a beefier 395-hp for all other versions. For now, there’s no crazy 518-hp V8 that’s offered with the short-wheelbase Defender 90. Pity. 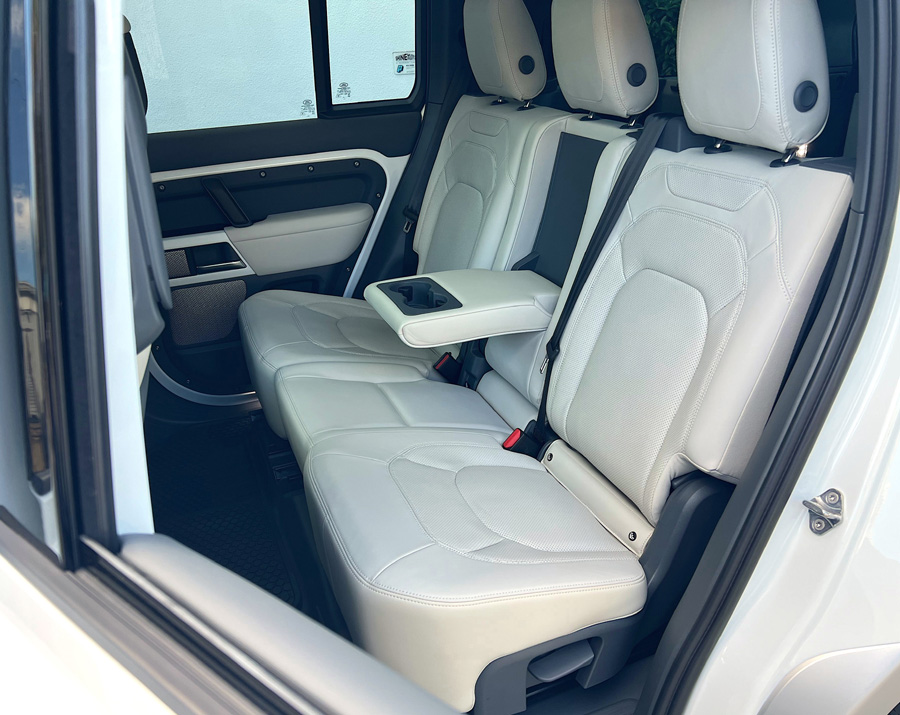 But this 395-hp 3.0-liter, with its electrically-driven supercharger designed to combat turbo lag, is one terrific powerplant. And coupled with the superb 8-speed ZF automatic, it can punch the 130 from rest to 60mph in just 6.2 seconds and haul up to 8,200 pounds.

And despite the 130’s elongated body, what hasn’t been compromised one iota is this new flagship Land Rover’s unparalleled off-roading abilities.

Standard on all 130s is Land Rover’s proven all-wheel drive system, electronic air suspension with Adaptive Dynamics, plus configurable Terrain Response which lets the driver fine-tune the driving to tackle just about any terrain. 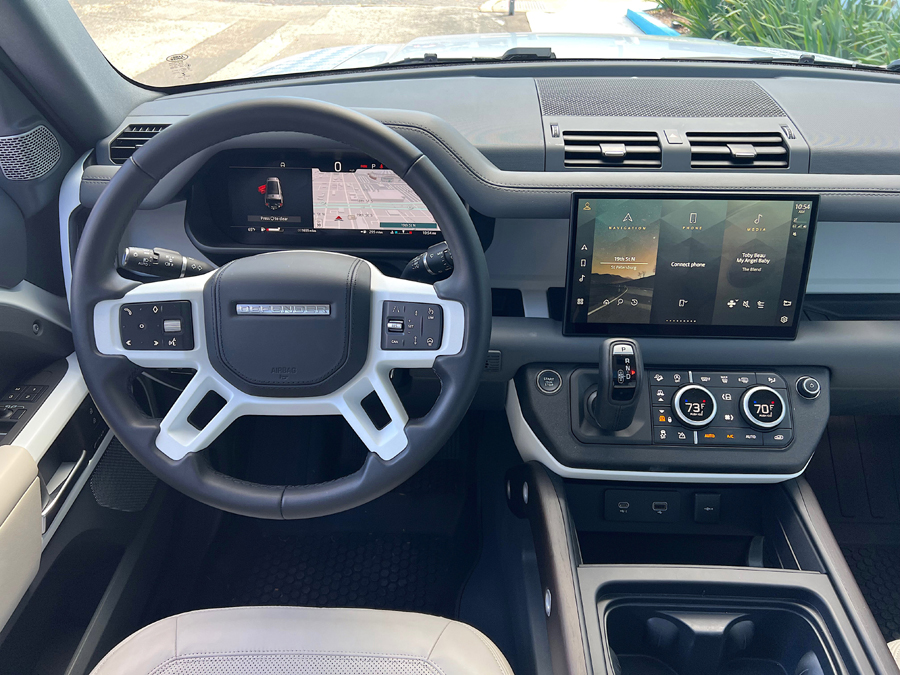 And with that next hurricane no doubt just around the corner, you’ll be pleased to know this new Defender 130 can wade through water almost three-feet deep.

On the road less traveled, that air suspension reduces body roll through the twisties, while smoothing out the ride. Nicely-weighted, super-precise steering gives a feeling of balance and agility. It’s one terrific-driving SUV.

As for picturing yourself on safari communing with wildlife in the Serengeti? Priceless.