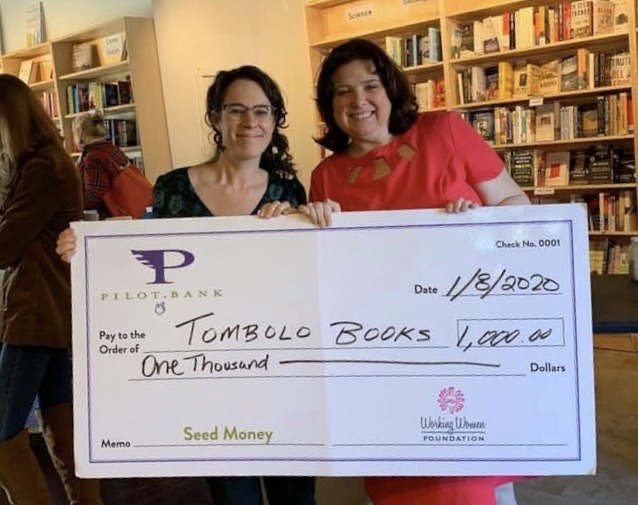 A bra company for women with small busts.

What do the businesses in this eclectic list have in common?

They all received “Seed Money” grants from the Working Women Foundation (WWF) and — not coincidentally — they’re all owned by women.

The foundation instituted the Seed Money program expressly to help with women entrepreneurs whose businesses are still in their nascent stages, in operation for no more than three years.

WWF is the non-profit arm of Working Women Tampa Bay, whose founder, Jessica Rivelli, says that the foundation and its Seed Money initiative were natural outgrowths of WWTB’s networking programs.

“So many women came to me and said, ‘I credit WWTB with my success. How can I give back?’” says Rivelli. “We decided to channel this positive energy so that other women could start businesses.”

Rivelli knows from start-ups. A former TV producer, she decided at the age of 29 that she wanted to follow a different path and open a business of her own.

“I just found my spirit needed something more light than the traditional news grind.”

She got the idea for WWTB while still working at her TV job. Searching for an outlet through which she could network with other professional women, she found none. So she decided to try and fill that void herself.

Rivelli chose a tricky moment to launch WWTB — the onset of the 2008-09 financial crisis and recession. But the timing turned out to be just right. “There was a whole group of women being downsized or demoted,” she says, “and they were finding that networking was critical to their survival.

“Critical mass happened so fast,” she remembers. “I basically replaced my salary in my first year out of TV, and by our third year we had hit 600 members.”

Membership fees, event admissions and corporate partnerships power WWTB, which provides opportunities for women professionals and business owners to connect with and learn from one another through seminars, luncheons and other events both in person and online. Memberships have risen as high as 750, but declined during the pandemic — it’s tough to run an event-based business in such a climate — but Rivelli says the numbers are back to 600 now.

The decision to add a non-profit foundation arm arose in 2016 when WWTB was still growing. At first, WWTB board members were the ones who decided the recipients of the $1,000 grants. Then, in 2019, Rivelli had “an aha moment.” To stay more in keeping with the organization’s grass-roots beginnings, she decided to make fundraising for Seed Money a grass-roots effort, too, by creating The Power of 100: a group of 100 women who agree to donate $100 a year, with the $10,000 total getting divided into ten $1,000 grants. Who decides the grantees? The donors, who meet in small-group luncheons to view video applications.

She says the Seed Money lunches are inspiring for all involved. The donors hear about the applicants’ journeys “and then they get inspired. It reminds them of how it was when they started.”

Applications can be submitted anytime at workingwomen.com; there are no deadlines. “It’s a rolling application — completely 365.” From the applications, the board chooses three women a month to present to the Power of 100.

Sometimes at these luncheons, more than one applicant comes away with a prize. Recently, Denise Penske won the top prize for Pretty Lovely You, her bra company for women with small busts. But the runnerup, April Farkas of Plant City’s The Cheesecake Lady, so impressed Power of 100 member Doreen Caudell that she gave Farkas $1,000 herself.

For a business just starting out, the check is only one of the benefits of WWF’s support. Alsace Walentine, founder and owner of St. Pete’s beloved indie bookstore Tombolo Books, received a check for $1,000 to help pay for signage — which, in the rush to open their doors at the end of 2019, was “one of the things we hadn’t gotten around to yet.”

But the best part may have been the group of WWTB members — about 40 women, says Walentine — who visited the store, listened to short speeches not only by Walentine but by two women who own the neighboring businesses Squeeze Juice Works and Black Crow Coffee Co., then shopped and in many cases became customers.

The whole thing was “a great networking opportunity,” Walentine says. And, she added, she was glad to be able to talk about it because “I never got much of a chance to thank them.”

The application form for Seed Money grants can be found at workingwomenoftampabay.com/WWFoundationSeedMoney.