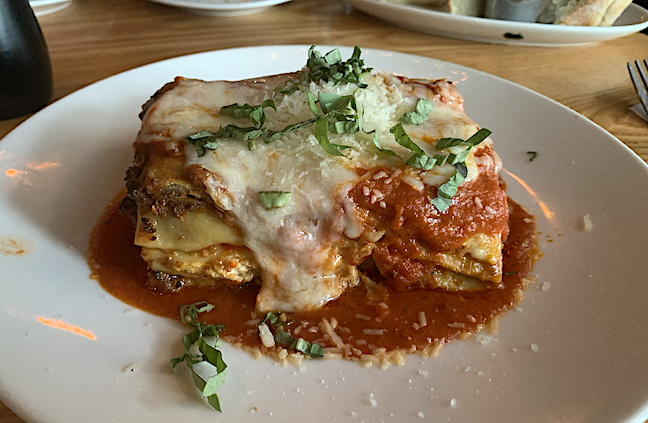 I rarely order lasagna in restaurants, because the version my wife makes, and my mother’s before her, are (and were) more to my liking than the ones I’ve had while eating out.

Both Bonnie’s and Mom’s are most likely Americanized — with well-organized layers of pasta, meat and cheese, the noodles firm enough for the dish to hold its shape and make for pleasingly balanced bites. Neither has a thick shell of cheese covering it.

As such, I don’t claim to be an expert on what constitutes true Italian-style lasagna. I just know what I like.

But lasagna is such a ubiquitous dish that it certainly deserves to be on the card for a Friday Food Fight. So let’s do this.

Among the multitudes of Italian restaurants in the Bay area, I chose two popular, mid-priced places in Pinellas: Pia’s Trattoria in Gulfport and BellaBrava: New World Trattoria in downtown St. Pete.

We ordered caprese salad as starters. 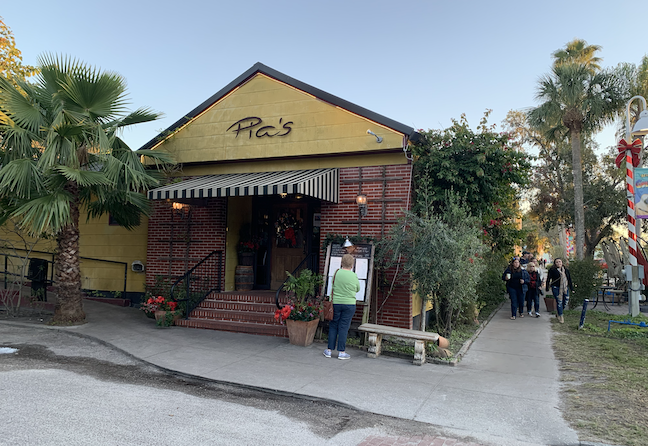 Situated on Gulfport’s Beach Boulevard, the town’s quaint main drag, Pia’s has established itself as an institution over its 14 years in business. That popularity was on full display when we arrived at 5:30 p.m. on Tuesday, sans reservation, and discovered that all indoor seating had been spoken for. That’s five-thirty. On a Tuesday.

The hostess found us a two-top, one of the last remaining on the large covered patio. The remnants of the cold snap were still in effect, so we sat right next to an outdoor heater. 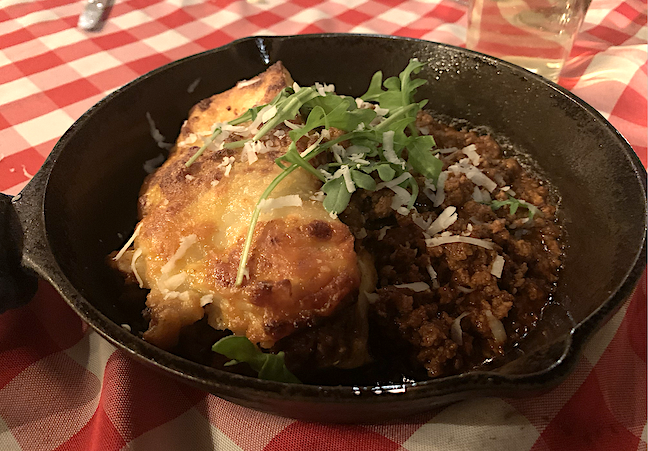 This was one of the more unusual lasagna presentations I’ve seen. Pia’s served it in a cast-iron skillet, half of which consisted of a pile of bolognese sauce. The other half, the lasagna part, was a misshapen hunk covered in cheese that was a tad too charred to be enticing. The dish was topped with a little cluster of arugula. 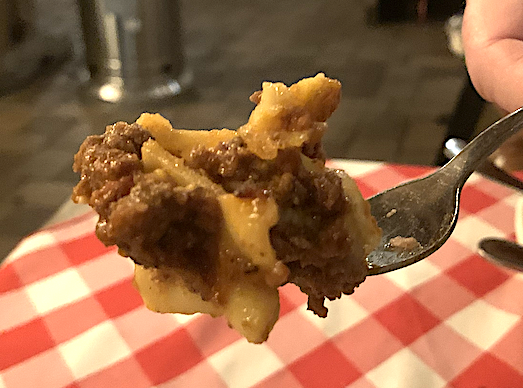 For the first forkful, I dug through the crusty top shell of cheese — it wasn’t easy — and combined it with some pasta and bolognese. Pretty tasty. As the eating ensued, though, I found the pasta a bit scarce and baked to a limp consistency. After awhile, I went pasta-hunting with my fork. There just wasn’t enough of it.

The dish lacked the defined layers of noodles/meat/cheese that I’m accustomed to. The meat sauce was over-abundant. If you like your bolognese way more meaty more than saucy, this one’s for you. For me, it quickly became too heavy.

In all, this lasagna ($19) held its own in terms of overall flavor, but the meat sauce was so dominant that it rendered the other ingredients all but moot. 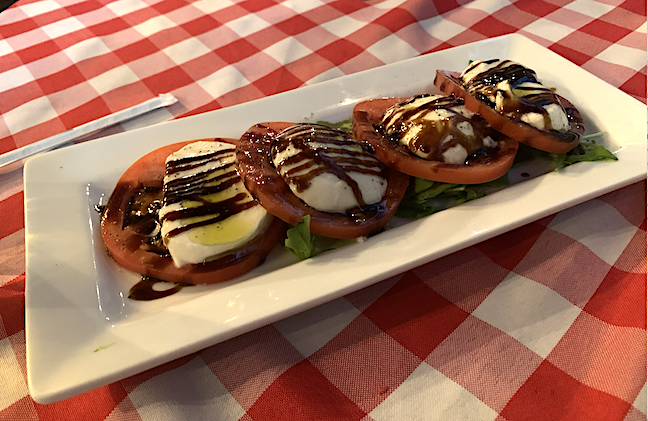 I’m glad we began with the caprese — four tomato slices on a bed of arugula, topped with thick slabs of mozzarella, and squiggled with a balsamic reduction and olive oil.

While the tomatoes were a shade on the mushy side — what tomatoes aren’t around here? — the moz was hearty and the salad blended together nicely. A definite palate-pleaser. 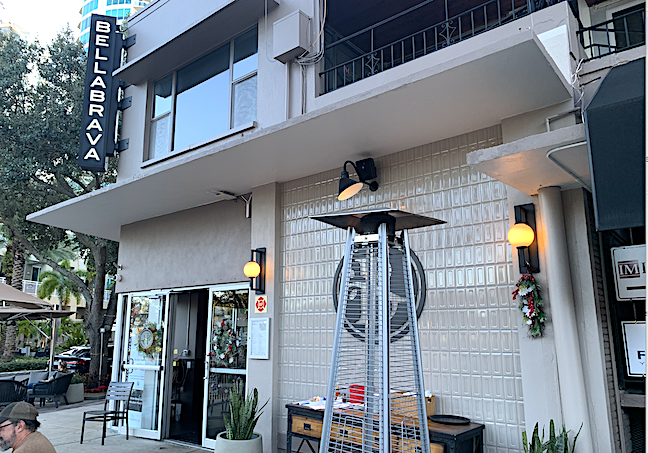 Late Thursday afternoon was a gorgeous 75 degrees, so downtown St. Pete along Beach Drive and around The Pier was bustling with foot traffic and folks eating al fresco. BellaBrava was doing a brisk business, but thankfully there was no wait for a party of two. (Does two constitute a “party”?)

We chose to eat inside the capacious dining room, near a window that looked out onto 2nd Avenue. 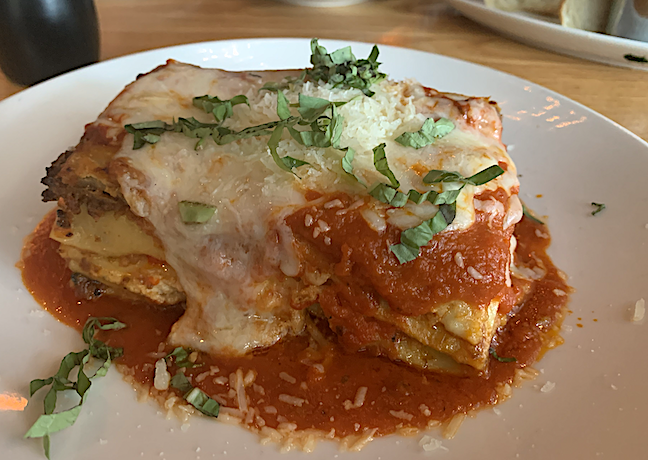 Like Mama used to make — and Bonnie too. Or close enough for me to be encouraged.

Sitting on a large white plate, the lasagna’s discreet layers were readily visible. (I later counted them: five sheets of pasta, with bolognese and cheese sandwiched in between.)

Instead of a pile of meat sauce, this dish luxuriated in a pool of red pomodoro sauce. 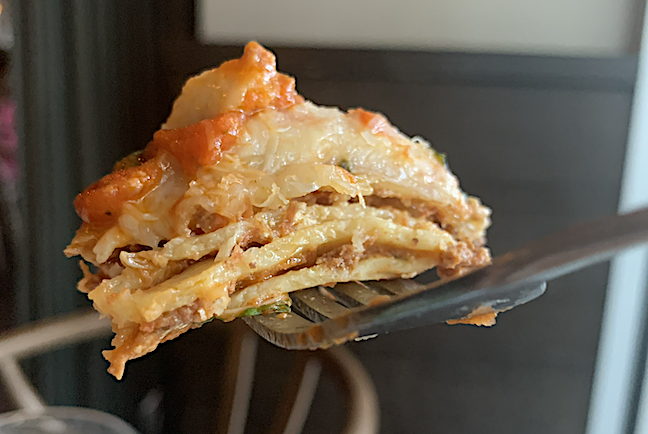 I fork-cut the first bite and paused to admire the tidy layers of pasta. The taste lived up to the visual. Every mouthful was well balanced, with each flavor and texture present but none of them dominant. The pasta had a lovely consistency — just firm enough — the bolognese was understated, and the cheese on top was more a cozy blanket than a tough shell.

The pomodoro added a welcome element of moistness, tang, and just a touch of spicy heat.

This plate of lasagna ($18.99) held together throughout, allowing me to enjoy the stacked ingredients in each bite. 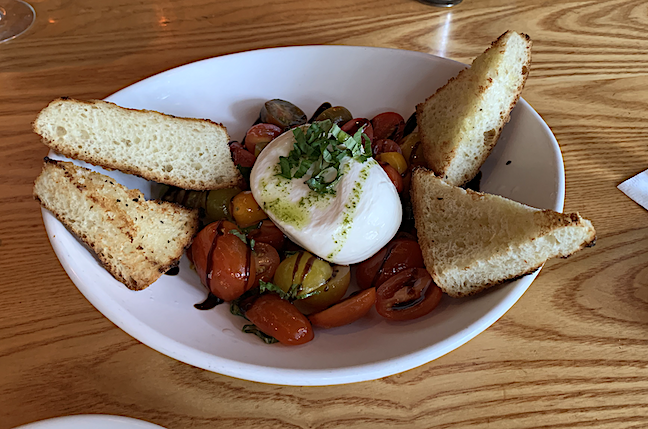 The salad could’ve used some more balsamic, but a pieces of focaccia bread were a welcome touch.

And the Winner of the Clash of the Lasagnas Is …

We have a split decision — of sorts.

BellaBrava is the clear winner of the lasagna taste-off. Pia’s Trattoria easily takes the prize for caprese.

But because the subject of this Friday Food Fight is lasagna, it’s apparent that the overall winner is BellaBrava.

Let me add that I’ve been to Pia’s on numerous occasions — with Bonnie, with family and with large groups of friends — and have enjoyed my meals and overall experience. The restaurant’s lasagna just didn’t work for me.