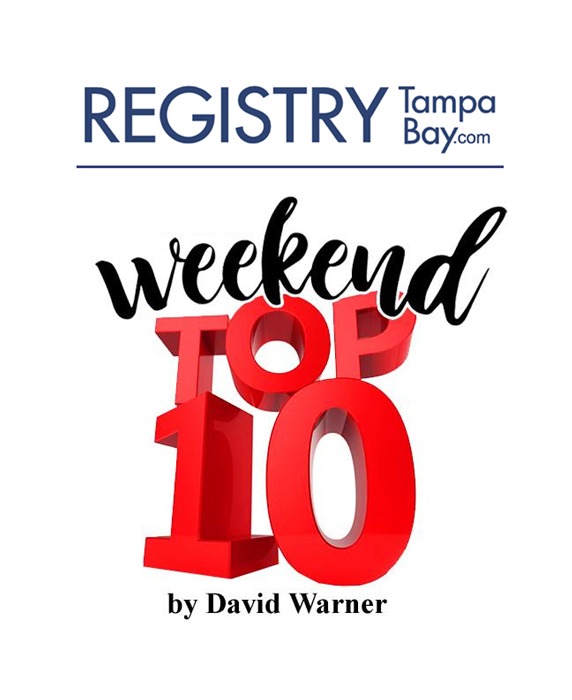 ‘Twas the Weekend Before Christmas…

… and all through the Bay, there’s song and there’s dance and a play every day!

11 Things to Do During December in Florida

Get a Handel on a favorite holiday concert tradition when the Florida Orchestra and the Master Chorale of Tampa Bay join forces to make glorious noise at the Straz (Friday at 8), the Mahaffey (Saturday at 8) and Ruth Eckerd (Sunday at 2). And that’s not all: there’s also a Holiday Brass concert on Saturday afternoon (The Palladium at 2). Dec. 17-19, the.floridaorchestra.org.

Clara and her princely Nutcracker, the Sugarplum Fairy and those pesky marauding mice, Tchaikovsky’s wondrous score and an ensemble of Next Generation Ballet’s rising stars and American Ballet Theatre principals Skylar Brandt and Herman Cornejo… it’s a sure recipe for seasonal magic. Friday at 7, Saturday at 2 & 7, and Sunday at 1 & 6 at the Straz. Dec. 17-19, strazcenter.org.

You’ve got just three chances left to catch this year’s edition of St. Pete Opera’s “non-denominational holiday extravaganza,” featuring eight singers and dancers, multiple instrumentalists, catchy tunes and some hilarious Christmas sweaters, judging by the promo pics. Watch indoors on Thursday or Saturday at 8 p.m. at Opera Central ($30-$250) or go for a picnic-in-the-park, pay-what-you-can vibe Sunday afternoon at 3 in North Straub Park (across from the Vinoy). Dec. 16, 18 & 19, stpeteopera.org.

The immersive arts/tech playground in the Warehouse Arts District with surprises at every turn (and a mystery to solve) opened in previews back in September, but the grand opening is this weekend. Festivities begin with a mayoral ribbon-cutting on Thursday morning at 11 and the unveiling of the attraction’s permanent entrance, new artworks and a mural by Chad Mize. Hours for the rest of the weekend are Thurs., Noon-9 p.m.; Fri.-Sat., 10 a.m.-9 p.m.; Sun., 10 a.m.-6 p.m. Next week it’ll be open Tuesday through Friday plus the day after Christmas, then Tuesday through New Year’s weekend, so it’ll be a great solution to the perennial Christmas vacation question: “The kids [or the visiting relatives] are bored already. Where can we take them that’s new?” fairgrounds.art.

6. RIDES BY THE RIVER

Rev up your engines at Armature Works in Tampa Heights Saturday morning for the monthly “Rides by the River” car show. Grab coffee from the Buddy Brew Coffee truck and enjoy a display of classic, luxury and exotic cars with the Hillsborough River as backdrop. There’ll be a special visit from the Hillsborough County Sheriff’s Office, who will be landing a helicopter on the Heights Pier at 7 a.m., and awards will be given for Best Classic, Best Import, Best Exotic, and Best in Show. Sat., Dec. 18th, 8-11 a.m., Armature Works, 1910 N. Ola Ave., Tampa.

7. THE AZURE SKY IN OZ at Studio Grand Central

The prolific local playwright William Leavengood follows up the acclaimed run of his play The Sister-Mothers of Gulfport at Studio Grand Central with the one-weekend-only premiere of his play The Azure Sky in Oz, based on the true stories of two women whose lives become forever intertwined with “the power and mysteries of the other-abled.” Amanda Ladd plays both women, one a successful artist whose life is transformed by the birth of her profoundly autistic son and the other a Special Ed teacher who embarks on staging a production of The Wizard of Oz. Dec. 16-19, Studio Grand Central, 2260 1st Ave. S., St. Petersburg.

The familiar Scrooge saga of greed and redemption as viewed through the prism of the colleague he wronged, Jacob Marley. The setup is a bit long as Marley is made to contemplate the hellish fate that awaits him for his own wrongdoings, but the payoff is funny and poignant, the ‘80s punk-inflected staging rocks hard, and the four-member cast is astonishingly versatile. Through Jan. 2, americanstage.org.

9. THE NIGHT BEFORE at freeFall

This original holiday musical — kind of a mashup of an Andy Williams at-home Christmas special and an episode of PeeWee’s Playhouse — is getting great buzz, and no wonder, given that it’s the creation of Matthew McGee and Michael Raabe. That means, however, that tickets are scarce, so hop on over to freeFall’s website now because it closes Christmas Eve. Through Dec. 24, freefalltheatre.com.

10. THE CURIOUS INCIDENT OF THE DOG IN THE NIGHT-TIME

This stage adaptation of the best-selling novel about a teenager on the autism spectrum who journeys bravely into the world to solve a crime was a Broadway hit, and the Tampa Rep/ThinkTank Theatre production (performing at Stageworks) has been well-received, too. But it closes Sunday, so act quick if you want to see it. Dec. 17-19: Friday and Saturday at 7:30 p.m.; Saturday and Sunday at 3 p.m., at Stageworks Theatre, 1120 E. Kennedy Blvd., Tampa, tamparep.org.

Yes, Virginia, you can still catch a lighted boat parade. On Saturday, the Friends of the Riverwalk present Tampa’s boat parade, which begins at 6 p.m. and travels from Davis Islands to Tampa Heights, then turns toward Sparkman Wharf. On the beaches, the Redington and Indian Shores parade will move up the Intracoastal Waterway beginning at 6 p.m. on Sunday from just north of the Tom Stuart Causeway Bridge in Redington Beach to the Caddy’s in Indian Shores.