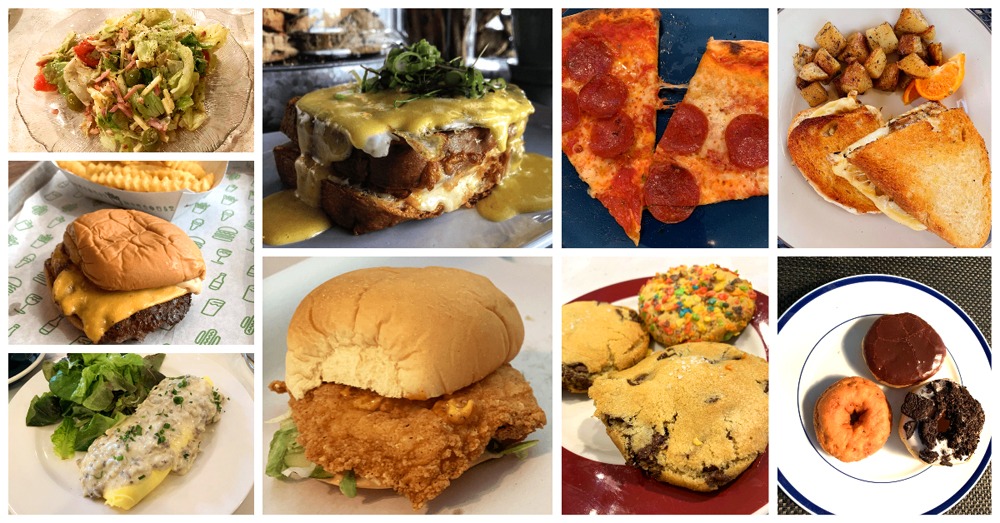 We have now published 10-count ’em-10 Friday Food Fight posts since the feature debuted in October. Since lists of 10 are all the rage in Listicle Land, especially at year’s end, we’re listing all 10 winners here and linking back to our writeups and the contenders’ websites — all tasty options for your holiday and post-holiday noshing! Next week, just in time for New Year’s Eve, we head back into the arena for The Battle of the Bubblies: May the best Prosecco win!

Story: “Fray’s or Daddies: Who does donuts better?” (10/1/21) The runner-up: Daddies Donuts & Delites (since renamed Pink Daddies) Key quote: “While Daddies scored big on appearance and creativity (and fun), Fray’s edged them out on flavor (and value). ” Fray’s location: 649 34th St. N., St. Petersburg. (There are also Fray’s franchises on 16th St. and Park Blvd, but we bought our donuts at the 34th St. location.)

The story: “Popeyes vs. Better Byrd: Who’s the chicken sandwich champ?” (10/15) The runner-up: Popeyes Key quote: “There are many things to recommend about the Popeyes Classic, not least of which is the price. But Better Byrd’s healthy-eating approach made its chicken sandwich that much more appealing.” Better Byrd location: 4447 4th St. N., St. Petersburg (in the On the Fly Food Hall).

The story: “What a croque! La Croisette vs. Sammy + Paco’s” (10/22) The runner-up: La Croisette Key quote: “These are both excellent renditions of a classic sandwich… but the extra dabs of creativity in Sammy + Paco’s version translate into layers of flavor that make it that much better a dish all around.” Sammy + Paco’s is no more, but… The owners have decided to close S+P’s in order to devote more time and space to their catering business. But don’t fret: They plan to extend the hours of their popular Lolita’s restaurant to include brunch, and I’ll bet the Croque Madame will be on the menu. Lolita’s is at 16 18th St S. in St. Petersburg.

The story: “The Grill of Victory: Fo’Cheezy vs. Uptown Eats” (10/29) The runner-up: Fo’Cheezy Twisted Meltz Key quote: “I like the vibe at Fo’Cheezy and definitely want to try some of the more over-the-top choices…But Fo’s most basic trademark sandwich couldn’t quite match the subtle, savory version at Uptown Eats.” Uptown Eats location: 689-D Dr. MLK Jr. St. N., St. Petersburg.

The story: “Salad Daze: The Columbia vs. Toss” (11/5) The runner-up: Toss Salads & Wraps Key quote: “The salads — the classic vs. the facsimile  — were just about equally delicious, but there’s just something about the 1905, and the Columbia, and the whole package at Sand Key. Maybe it’s the salt air, maybe it’s the romance, maybe it’s the Worcestershire sauce?” Columbia location: There are many Columbias, but we did our salad taste test at the Sand Key location at 1241 Gulf Boulevard in Clearwater.

The story: “O, Omelette! Willa’s vs. The Frog Pond” (11/12) The runner-up: The Frog Pond (Corey Ave. in St Pete Beach) Key quote: “Both restaurants do the omelette justice, albeit in very different styles. But I have to give the nod to Willa’s for an experience that was both innovative and supremely delicious… Get the rotisserie chicken as a side!” Willa’s location: 1700 W. Fig St., Tampa.

The story: “Pumpkin pie or pumpkin cheesecake?” (11/19) The runner-up: Pumpkin pie from The Fresh Market on 4th St. in St. Pete Key quote: “If you’re looking for a straightforwardly delicious pumpkin pie, you can do no better than the one made in the bakery at The Fresh Market. But if you’re looking for a dessert that will make everyone swoon, ‘This is sooooo good,’ you’ve gotta go with Mike’s Pumpkin Cheesecake.” Locations: Mike’s Pies are available at multiple local and national retailers (including The Fresh Market).

The story: “Pizzas with heat: Fabrica vs. Colony Grill” (12/3) The runner-up: Colony Grill Key quote: “Try Colony for its new-to-many-of-us bar pizza style. The only problem is that the taste of the hot oil tends to overwhelm any other flavors; there’s not the depth you get in the hot-oil (or hot-honey) variations at Fabrica. Fabrica’s pizzas just taste better — it’s as simple as that.” Fabrica locations: 101 7th St. S. in St Petersburg and 142 S Meridian Ave. in Tampa.

The story: “Christmas cookie showdown: Alessi Bakery vs. Bake’n Babes” (12/10) The runnerup: Alessi Bakery Key quote: “If you’re looking to make a good first impression with your cookie displays, Alessi’s whimsical varieties will do the trick. But for a cookie that’ll wow your guests with its deep, rich flavor and satisfying texture, go with Bake’n Babes.” Bake’n Babes locations: Armature Works and Davis Islands in Tampa.